When I applied for a new passport few months ago I knew exactly what I had to do. Two photos - 3cmx4cm, copy of old passport's title page, completed and signed application form and a check for the payment of 40$ from the cashiers' office. I ticked boxes on my checklist and that was it, I knew that I would get my new passport in 10 working days. Checklists make life easy; It is not therefore surprising that during Jesus' ministry people asked him often what was it exactly that they had to do in order to book a place in this new world that he promised.

All three synoptic gospels have a story of a young rich man who asks Jesus about what he must do to go to the kingdom of heaven. "You know the commandments", says Jesus, "Don't steal, don't kill, respect your parents ...".  "That I have done since my childhood", says the young man, "but are there any additional rules that I must follow?". "Well, if you really want to know", says Jesus, "sell everything you have and give it to the poor".

Most people interpret this passage to be just a hyperbole, rhetoric exaggeration to evoke strong feelings and tell us that charity is extremely important but not something that should be taken literally. After all very few people in the history, including many saints and good Christians, have done anything like this.  That's what I thought too, but recently I have changed my mind and now I
believe that Jesus really meant what he said quite literally. Below I will try to briefly explain why I think so.

We know that one of the two greatest commandments is "Love your neighbour as yourself". All other commandments follow from this (and neighbour here obviously means any fellow human, not only people who leave in the neighborhood of your house).

My daughter is one person to whom I really apply this rule and whom I truly love as myself and even more than myself. In the future, when she grows up and leads independent life, if something happens and she falls into hardship so that she has to live on the streets cold and hungry, there is no doubt in my mind that I will immediately sell all I have to help. How can I have even a single meal or sleep in a bed for just one night when I know she is in such a trouble?! I would not be able to do any of those things until I did everything I could to help her.

Now, if I truly followed the great commandment, I would apply it to every single person and would love them as much as I love my daughter. If that was the case, how could I go to sleep in a warm bed or eat sushi when I knew that there are thousands of people who are starving, freezing, in distress and have nobody to comfort them? If I truly followed the commandment I would sell everything that I had immediately and shared it with my fellow brothers and sisters in need to help them as much as I could.

There is indeed a checklist for those who want to enter the kingdom of heaven and it is very short. It has just one item on it: "Love your neighbour as yourself", but this box is very difficult to tick.

"It is easier for a camel to go trough the eye of a needle, than for a rich man to enter the kingdom of God".


This blog entry was writen by Lado Samushia. Thank you, Lado!
Posted by Marc Manera at 5:16 PM 0 comments 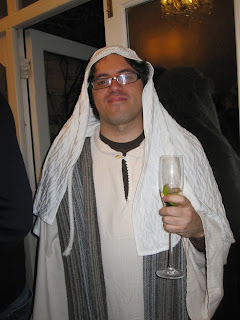 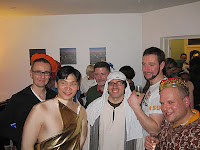 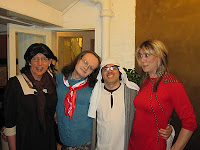 Sorry, I don't have any money

To encourage reflection, as a challenge to our -and mine- personal Advent preparations, I thought I would share this cartoon from Naked Pastor.

Links to this post
Newer Posts Older Posts Home
Subscribe to: Posts (Atom)
“ When she has found it, she calls together her friends and neighbours, saying, Rejoice with me, for I have found the coin that I had lost.” (Lk 15,9 NRSV)